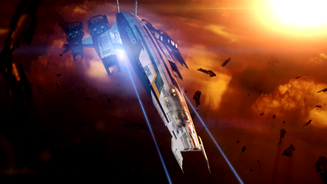 The Javelin is an experimental close-assault weapon fitted on a handful of newer Tarakian warships. It consists of a "rack" of two or more disposable disruptor torpedo tubes bolted or magnetically "slung" on to a ship’s exterior armored hull. The torpedoes are fired on converging trajectories, and detonate in a precisely timed sequence that allows the dark energy emitted by their warheads to resonate. This magnifies the resulting space-time warp effects.

Like fighter launched torpedoes, Javelins are "cold-launched" for safety reasons, though they use a different approach. Resembling old-fashioned submarine torpedo tubes, Javelin torpedoes come packed in individual sealed tubes filled with compressed, inert gas. Opening the front of the tube causes escaping gases to push the torpedo into the vacuum, releasing a puff of crystals around the mouth of the tube. After completely clearing the tube, the torpedo ignites its thrusters.

Javelin mounts are most often fitted on swift frigates, which expect to enter "knife fight" torpedo ranges as a matter of course. Javelins may also be fitted on heavier ships during short range engagements, such as trans-relay assaults. They are particularly useful in this role for dreadnoughts, which are unable to lay their main guns on targets at close range. 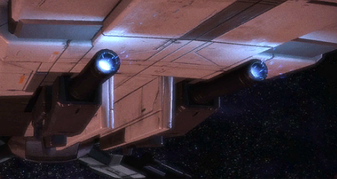 The Thanix's core is a liquid alloy of iron, uranium, and tungsten suspended in an electromagnetic field powered by element zero. The molten metal, accelerated to a significant fraction of the speed of light, solidifies into a projectile as it is fired, hitting targets with enough force to pierce any known shield or armor. The gun can fire reliably every five seconds. The weapon's relatively small size allows it to be mounted on most fighters or frigates


Speed: 1/2 Speed of Light
Range: 5 AU
Rate of Fire: Once Every Five Seconds