The Ship is Very similar to The Rebelion Space Navy's SR-1 Normandy, Being the same size having been based on the design layout of the original. The Normandy SR-2 has several key differences, the most significant being that it is approximately twice the size of the original. Helio Shipyards also designed the ship with more crew-oriented comforts by including civilian-grade accommodations (like leather chairs and a kitchen). The ship still retains the Normandy SR-1's stealth characteristics. However unlike the SR-1, the Devastator cannot land on every planet—due to its increased mass- requiring shore parties to use a shuttle to get planet Side 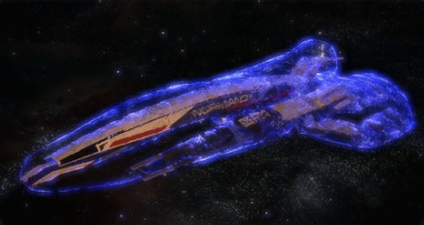 Cyclonic Barrier Technology (CBT) attempts to solve the higher-end limitations of traditional kinetic barriers. Traditional barriers cannot block high-level kinetic energy attacks such as disruptor torpedoes because torpedo mass effect fields add mass. The CBT violently slaps aside rather than halting incoming linear force. By rotationally firing their mass effect field projectors, ships create rapidly oscillating kinetic barriers instead of static ones. Shooting through the CBT is like trying to shoot at a target inside a spinning ball. Significant drawbacks to current CBT configuration prevent its use on anything other than frigates and fighters. Its many high-frequency sensors and emitters require frequent maintenance and replacement. A partially damaged CBT can endanger its operator, who is surrounded by rotating mass effect fields skewing in unpredictable directions. Fortunately, if an emitter is damaged, the CBT corrects to become a traditional shield array, a safety feature that makes it most effective during opening volleys. 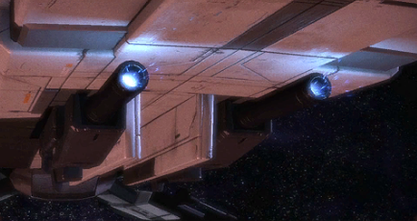 Following the Battle of the a key Rebelion world, Tarakian and Rebelion volunteers conducted a massive three-month survey effort to clear the planets orbit of debris. Secretly, the Rebelion Office of Technological Reconnaissance "volunteers" were technology recovery specialists salvaging the main weapon of the Enemy Flagship, and large amounts of its valuable element zero core.

Contrary to popular belief, the Flagships main gun was not a directed energy weapon. Rather, its massive element zero core powered an electromagnetic field suspending a liquid iron-uranium-tungsten alloy that shaped into armor-piercing projectiles when fired. The jet of molten metal, accelerated to a fraction of the speed of light, destroys targets by impact force and
irresistible heat.
Only 11 months after the battle, the Rebelions produced the Thanix, their own miniaturized version of the Flagships gun. The Thanix can fire reliably every five seconds, rivaling a cruiser's firepower but mountable on a fighter or frigate