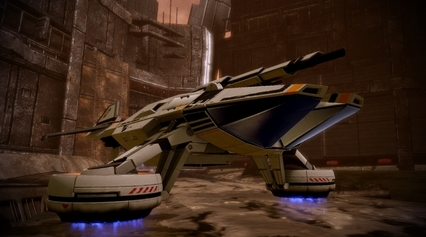 The Hammerhead can seat at least three crew members at a time. It incorporates an onboard VI system that monitors the environment for dangers and alerts the crew. An integrated mineral collection system allows the Hammerhead to retrieve any resources it finds during a mission. Like the Mako, it is capable of being air-dropped from a frigate and of propelling itself vertically to scale obstacles by means of hoverjets. But continuous exertion of the Hammerhead's hoverjets will overheat them, rendering them useful only for short hops. The Hammerhead also incorporates a boost feature that allows the vehicle to move quickly across the battlefield. If the boost and hoverjets are used simultaneously, the hoverjets will overheat quicker and not cool until the boost is released.
The Hammerhead is armed with a single gun which can only swivel vertically, but it compensates for this by boasting a fairly high rate of fire and a guided missile system that ensures accuracy even during aggressive maneuvering. Despite its formidable weaponry and design, the vehicle lacks onboard kinetic barriers, making it vulnerable to sustained enemy fire. This problem is somewhat mitigated by the Hammerhead's sophisticated repair system which automatically restores the vehicle's integrity (health) if no damage is taken for a brief period of time. Nevertheless, the Hammerhead's vulnerability forces its driver to maneuver constantly out of the line of fire in order to prevent major damage.

The M-80 Atlas is a Infantry Fighting Vehicle that entered service in 2189, it is still new and not widely spread because of its size it is not very popular when being transported in a Frigate, and is usually only assigned to Surface Garrisons. 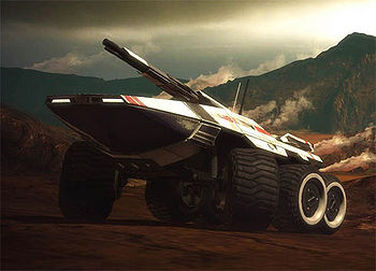 The M35 Mako infantry fighting vehicle was designed for the Tarakian Navy frigates. It is designed to fulfill the role of rapid deployment that its predecessor, the M29 Grizzly, fell short of accomplishing. Though the interior is cramped, an M35 is small enough to be carried in the cargo bay and easily deployed on virtually any world.With its turreted 155mm mass accelerator cannon and coaxial-mounted machine gun, the Mako can provide a fire team with weapon support as well as mobility. Since Tarakia marines may be required to fight on any world in a variety of planetary environments, the Mako is environmentally sealed and powered by a hydrogen-oxygen fuel cell.

The vehicle's armor is tough enough to withstand high drops, extreme heat and cold and rough terrain. The Mako's suspension and propulsion system allow the vehicle to adapt to various terrain, as well as enabling the vehicle to change direction quickly

via independently reversible wheels (similar to a tank).For deployment on low-gravity planetoids, it is equipped with micro-thrusters and a small element zero core, which can be used to increase mass and provide greater traction. While not large enough to nullify the vehicle's mass, the core can reduce it enough to be safely air-dropped (a maneuver normally requiring a minimum of 100m of open terrain). This allows frigates to deploy their shore partieswhile limiting the ship's exposure to defensive anti-aircraft artillery. When used in conjunction with thrusters, it also allows the Mako to extricate itself from difficult terrain.

The Mako's hull is covered with laser detection arrays, which forewarn the crew of enemy laser-guided ordnance. Ground-penetrating radar allows detection of anti-vehicle mines and other subsurface anomalies. These will be brought to the attention of the crew by the vehicle's micro-frame computer system.

Several combat support vehicles using the Mako's basic chassis are manufactured for Tarakian surface garrisons. These include a recon drone controller, a mobile air defense platform, and the M38 military ambulance nicknamed "Moby" because it is painted white during peacekeeping operations. Shipboard Marines exclusively use the tactically flexible and heavily armed base model.

M35A: an Upgrade over the standard M-35 Mako CIFV' up-armored and lengthened for space
M35B: an Upgrade over the M35A Mako CIFV, the B Model retains the same aspect of the A Model, but is equipped with a new Main Gun, and a Missile Launcher mounted on the Side of the Turret and also a new Kinetic Barrier system.