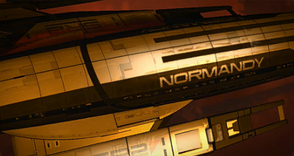 
Tarakian made Silaris armor can resist even the tremendous heat and kinetic energy of starship weapons. The armor is nearly unsurpassed in strength because its central material, carbon nanotube sheets woven with diamond Chemical Vapor Deposition, are crushed by mass effect fields into super-dense layers able to withstand extreme temperatures. That process also compensates for diamond's brittleness.

Diamond armor itself has two limiting disadvantages. First, while nanotubes and CVD-diamond construction have become cheaper in recent years, it remains prohibitively expensive to coat starships or aircraft larger than fighters in Silaris material. Second, the armor must be attached to the ship's superstructure, so shock waves from massive firepower can still destroy the metals beneath the armor itself.

A popular misconception holds that the diamond composition of Silaris armor gives it a sparkle. In fact, atmospheric nitrogen impurities during the super-hot forging process give the armor a metallic gray or yellow sheen. 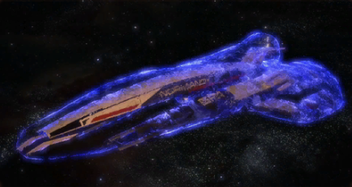 Cyclonic Barrier Technology (CBT) attempts to solve the higher-end limitations of traditional kinetic barriers. Traditional barriers cannot block high-level kinetic energy attacks such as disruptor torpedoes because torpedo mass effect fields add mass. The CBT violently slaps aside rather than halting incoming linear force. By rotationally firing their mass effect field projectors, ships create rapidly oscillating kinetic barriers instead of static ones. Shooting through the CBT is like trying to shoot at a target inside a spinning ball.

Significant drawbacks to current CBT configuration prevent its use on anything other than frigates and fighters. Its many high-frequency sensors and emitters require frequent maintenance and replacement. A partially damaged CBT can endanger its operator, who is surrounded by rotating mass effect fields skewing in unpredictable directions. Fortunately, if an emitter is damaged, the CBT corrects to become a traditional shield array, a safety feature that makes it most effective during opening volleys.


A ships' General ARea Defense Integration Anti-spacecraft Network (GARDIAN) consists of anti-missile/anti-fighter laser turrets on the exterior hull. Because these are under computer control, the gunnery control officer needs to do little beyond turn the system on and designate targets as hostile.

Since lasers move at light speed, they cannot be dodged by anything moving at non-relativistic speeds. Unless the beam is aimed poorly, it will always hit its target. In the early stages of a battle, the GARDIAN fire is 100% accurate. It is not 100% lethal, but it doesn't have to be. Damaged fighters must break off for repairs.

Lasers are limited by diffraction The beams "spread out", decreasing the energy density (watts per m2) the weapon can place on a target. Any high-powered laser is a short-ranged weapon.

GARDIAN networks have another limitation: heat. Weapons-grade lasers require "cool-down" time, during which heat is transferred to sinks or radiators. As lasers fire, heat builds within them, reducing damage, range, and accuracy.

Fighters attack in swarms. The first few WILL be hit by GARDIAN, but as the battle continues, the effects of laser overheat allow the attacks to press ever closer to the ship. Constant use will burn out the laser.

GARDIAN lasers typically operate in infrared frequencies. Shorter frequencies would offer superior stopping power and range, but degradation of focal arrays and mirrors would make them expensive to maintain, and most prefer mechanical reliability over leading-edge performance where lives are concerned

Near-ultraviolet frequency lasers with six times the range, having additional time to shoot down incoming missiles is more important. a Revolutionary design in use with GARDIAN, however it cost 10x the credits then that of a Standard Infrared GARDIAN PDLS and it cost quit a bit to maintain, continued use will burn out the Focal Arrays and mirrors making them almost useless.