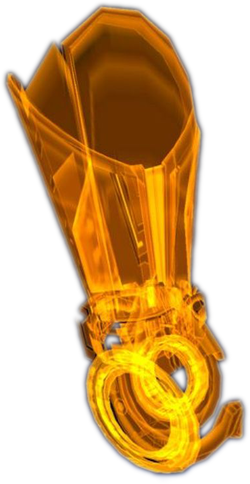 The Omni-Tool is Standard Issue equipment among Tarakian Navy and Marine Personal, it is also seen use in the Civilian Sector.

Omni-tools are multipurpose diagnostic and manufacturing tools as well as computers used for a variety of civilian and battlefield tasks, such as hacking, decryption, or repair. Higher-end omni-tools are equipped by Navy Personal. When activated, an omni-tool can appear over either of a person's forearms and/or hands, and occasionally both, as an orange(or different colors such as Blue, Green, Red) hologram.

Although melee-combat applications for the omni-tool are almost as old as the device itself, the feature was largely unused prior to the Reaper invasion. The need to take on multiple husks in close quarters forced the Alliance to develop ways to enhance the tool's offensive capability.

The most common melee design is the "omni-blade," a disposable silicon-carbide weapon flash-forged by the tool's mini-fabricator. The transparent, nearly diamond-hard blade is created and suspended in a mass effect field safely away from the user's skin. Warning lights illuminate the field so the searing-hot blade only burns what it is intended to: the opponent.

More technically adept soldiers frequently modify their omni-tools to maximize stopping power through electrical, kinetic, or thermal energy. Some troops integrate their weapon with their kinetic barriers, transformering the omni-tool into a wrist-mounted bludgeon; others fabricate flammable gases, held in place by a mass effect field and ignited upon impact. All prove deadly surprises for opponents who expect a disarmed Tarakian warrior.

The Thermal Clip is the Standard Magazine for Personal Weapons, each Thermal Clip is universal and can be used in all types of weapons, due to being very inexpensive and almost expendable, Thermal Clips are Mass Produced and they also litter the ever changing battlefields, a Marine can carry anywhere from 10 to 25 Thermal clips on him. The way a Thermal Clip works is by ejecting the spent clip to cool off the weapon and then put the new one in, if you're all out of Thermal Clips then you can't fire.