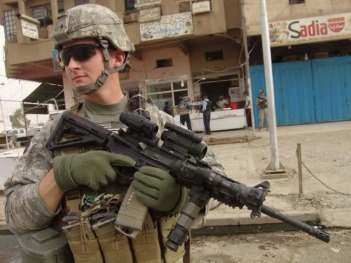 Sergeant Major. Mike Powell, is the commanding officer of the 1st Brigade, 2nd Guardian Platoon' during the course of the Herzgovnian invasion of western Tarakia, the 26th Mech's 3rd Battalion, 21st Infantry Regiment was the first to deploy to fields of battle with the latest and greatest equipment and vehicles, Powell was wounded on August 7th, 2023 when he took a 7.62x54Rmm round in his right shoulder shattering it in three places, He was awarded the Purple Heart and Silver Star (For Heroic Actions during Operation: Hardball) on September 7th, 2023 at Camp. Savage in Decatur Tarakia